I was reading my copy of SolarToday this weekend and ran across a fantastic article about the State of the Solar industry. Here is a link.

In summary, solar panel prices are way down and hovering around $1/watt. Back in 2005 when SolarYpsi got started, solar panels were selling for about $5/watt. This has been hard on solar panel manufactures and several of them have got out of business. But this is great news for consumers and solar installers. It is also great news for companies that make solar racks and inverters for solar installations. With these lower prices, solar power is giving coal, nuclear, and natural gas energy a run for it’s money. 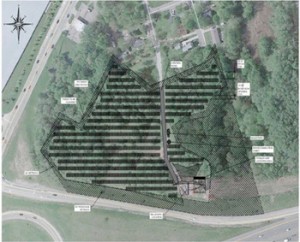 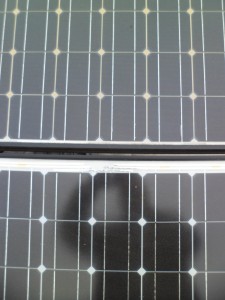 I don’t think is changes the power output, but it looked interesting. The darker color might make the panel absorb more thermal energy and make the panel warmer increasing the resistance, but it’s a small percentage of the total area and the effect should be marginal. Not sure what is causing the backing material to become darker, but my guess would be that it’s caused by the UV radiation from the sun.

Looking closer at some of the cells I was surprised to see some silver migration. Silver migration is a not well understood metallurgical phenomenon where the atoms of silver (in the printed wires on the cell), under mechanical and/or thermal stress, migrate and grow on the surface of a device. You can read the details from the Wikipedia page on whisking(metallurgy)

Here is an up close picture of the cell where you can see the silver has migrated from the vertical printed wire (you can see a valley down the center) and grows between the finer horizontal wires covering up some of the silicon surface. 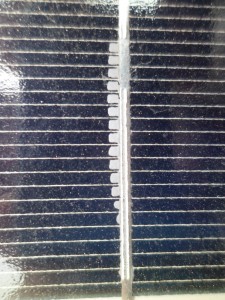 Again, I think the effect will be marginal since the amount of silicon covered up is very small compared to the area of the total panel. Also the additional silver on the surface of the silicon should help collect more electrons some might have some small positive effect on the efficiency of the panel. If we ever replace these solar panels (+22 years from now?) I’ll have to remember to take this panel apart and measure the output from these cells with silver migration.

Here is another picture of the silver migration. 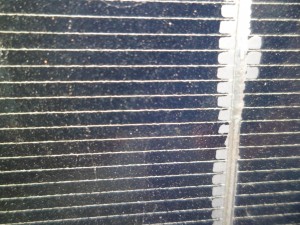 Here is a picture of the whole cell with silver migration in case someone wants to try and measure the loss of area from the silver growth. 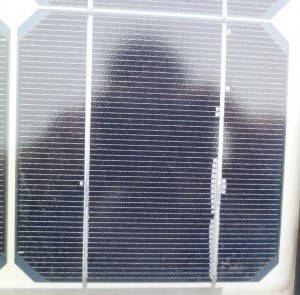 Here is a picture of a cell with out silver migration.