I had several people ask me about putting a second row of solar panels on Ypsilanti’s City Hall. I’ve thought about it and always wondered where the next row would have to be place so it would not be in the shadow of the first row. Well yesterday was the summer solstices, the time of year when the sun is at it highest position in the sky. It was a nice sunny day, so I headed to City Hall with my camera around 1:00pm in the afternoon and took this picture. 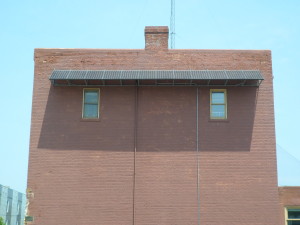 Note how far down the wall the shadow reaches. If we ever do put a second row of solar panels on City Hall they would have to be about half way down the wall so they are not in the shade of the first row.