It’s been another interesting year for solar power in Ypsilanti and the surrounding area. We finished the year with about 50 solar installations on the website. I say “about” because some are very small, a single panel for WirelessYpsi in Frog Island, and some very large, like the Corner Brewery’s 140 panels. The important part is that the number of systems in Ypsilanti and the local area is growing. Of the 50 installations, 26 are in the City of Ypsilanti, and I know of 2 other system not on the website, and 5 systems that are in the process of being installed that should be finished by the spring. 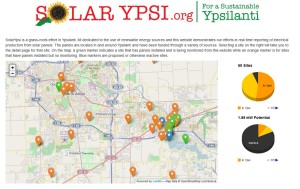 The SolarYpsi.org website now has 183 documents which are mostly data sheets for solar panels, inverters, and racking system and 748 images of the 50 solar locations. Many thanks go to Steve Pierce at HDL.com for hosting the SolarYpsi website, and our continued thanks also goes to Nik Estep a graduate of EMU that built and still maintains the website.

New this year are aerial videos of the different solar installations around town. Cameron Getto is the drone pilot, videographer, video editor, and publisher. Cameron has made 14 approximately one minute videos which can all be seen on the SolarYpsi YouTube channel, youtube.com/SolarYpsi. The SolarYpsi FaceBook page that Steve Pierce started has also be growing in “likes” and followers. facebook.com/SolarYpsi

SolarYpsi got published in the national magazine HomePower, with an article about the solar installation at 323 Oak street and was also on the local TV show CitiTV Channel 19.

SolarYpsi continues to give solar presentations to small groups and individuals. In 2014 SolarYpsi gave 9 talks reaching 460 people face-to-face. Most of those reached where at the annual Ypsilanti Heritage Festival where SolarYpsi has installed a large solar installation for the third year in a row.

The biggest news this year was the anonymous donor that is funding 5000-watt solar installation for six non-profits organizations around town. You can read about it here.

The most disappointing news of the year has been the lack of progress on the DTE solar farm that was planned for the South end of town near the highway.

The goal for SolarYpsi for 2015, our tenth anniversary, is to continue to promote solar within the City of Ypsilanti. We need to encourage more people to put solar panels on their homes and businesses and to continue to look for grants, donors, loans, etc that will lower the price for residents to install solar power.

The future continues to look bright, but we need more solar installation in the City of Ypsilanti if we want to become a “Solar Destination“.