With all the recent solar installations going on in the City of Ypsilanti, I looked are our totals on the pie chart on the home page. We are currently sitting at 1,154,385 watts or 1.15MW. This is a bit conservative, since I know of a couple of solar installation that are not on SolarYpsi yet. 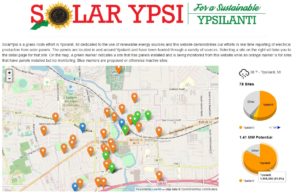 Then looking at the 2018 Environment America Shining City report, page 7, I can see that San Francisco is ranked #18 with 54.1 watt/capita and Washington DC is ranked #17 with 69.4 watts/capita.

That makes Ypsilanti number #18 in the national for solar on a watts per capita basis. Woohoo!!

Granted we’re a small city, but something we can all be proud of achieving. Let’s install more solar power and shoot for over taking Honolulu and being #1. Call a solar contractor today and get a quote.